Lady Gaga Born This Way vs Madonna Express Yourself 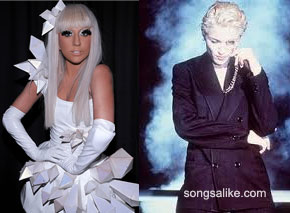 I think Lady Gaga is paying homage to Madonna in this one since it’s so close in the verse and chorus. Don’t be a drag, just lift a catchy melody from the queen of pop. Born This Way is the title track from Gaga’s 2011 album, and Express Yourself was released on Madonna’s Like A Prayer in 1989. Madonna supports the song and is not lawyering up. However, Gaga is facing other plagiarism allegations from production duo E-Tribe who claim the song is a ripoff to a track called Be Happy, which they wrote for pop group SNSD.

UPDATE January 12th, 2012: Madonna has officially made her ripoff claim with this response. “I thought, this is a wonderful way to redo my song (Express Yourself). I mean, I recognized the chord changes. I thought it was…interesting.”

Here’s a mash up: