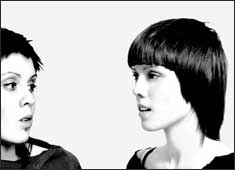 my favorite lesbian identical twin sister Canadian band, came to the Pantages Theatre in Minneapolis on November 30th, 2007, in support of their phenomenal record The Con. The album is on my best of 2007 list. They played a nice mix of this record and their older material.

Overall, the show was very good, with some minor distractions.

The first of which are intended for the crowd.

Much like Nancy Sinatra’s boots are made for walking, theater shows are made for sitting. You can stand for the encore only. Also, it’s not a free for all, and you can’t run up to the pit. Sorry kids. Stay off my damn lawn.

You can take a few pictures with your click click click click camera, phone, or James Bond spycam. You can’t take a google (look it up on google) of pictures or hold your gadget up for the entire concert. It feels like a search party pointing flashlights at me all night. Why even go to a live show if you plan to watch it through your 3 inch lens? I realize I will probably be using video from these rapscallions in this post, and I understand the irony.

OK, now on to the talent.

1. The drums and bass were way too loud, and the bassist had some kind of fuzz effect which did not jive with the songs in my opinion. C’mon ladies. Listen to your album. Pretend that your capable producer Christopher Walla is in the room, and persuade the album’s bassist Matt Sharp (Weezer, The Rentals) to join you on tour. Throw some Loonies at him since they’re worth something now (at least when this post was published). You write smart, well-crafted pop songs with an emphasis on vocals and simple but effective instrumentation. That’s what we want to hear at your concerts. I also think a second rhythm guitarist is overkill. I know you’re young and you want to rock (and I salute you), but don’t compromise the music.

walking with a ghost: