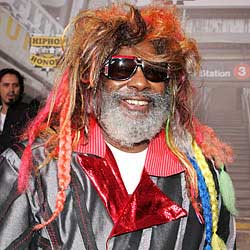 I guess the true dogfather as far as the courts are concerned is George Clinton, who now legally owns Bow Wow Wow Yippie Yo Yippie Yay. The phrase, which he originally wrote in the Parliament song Atomic Dog in 1982, has become part of the pop culture vernacular since Snoop Dogg and Dr. Dre resurrected it for the 1992 gangsta rap smash hit crossover Nothin but a G Thang from The Chronic. Apparently, Clinton drew the line when the backup band for R Kelly, Public Announcement, tried to get away with it in their song D.O.G. in Me in their 1998 album All Work, No Play. He raised the funk flag and dropped a lawsuit on the group, and the courts saw it his way awarding Bridgeport Music, the company that handles Clinton’s work, around 89 large. Bridgeport is also pursuing 476 (holy cripes!) other copyright lawsuits against various artists who borrowed from Clinton, though he is not seeing any of these funds since he is in a royalty dispute with Bridgeport.

« Weezer does Live Mash Up of MGMT Kids and Gaga’s Poker Face
Red Hot Chili Peppers: By The Way vs Lady Gaga: Paparazzi »