It’s true. The Damon Albarn-fronted uber hip animated band Gorillaz lifted a tune from the Canadian Troubadour Gordon Lightfoot. This is a case of verse sounds like verse.

If You Could Read my Mind

appeared on the 1970 album Sit Down Young Stranger and rose to #5 on the Billboard charts becoming his first American hit. This prompted Reprise Records to change the name of the album to (big surprise) If You Could Read my Mind. The album has a picture of the G-Light (everyone refer to him as G-Light from this point forward) staring out of a window with a content, possibly bordering on creepy, expression on his face similar to John Denver’s much creepier 1970 album cover for Take Me to Tomorrow. 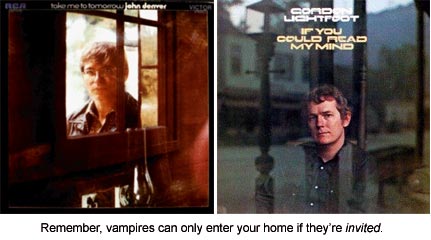 the second single off of the Gorillaz album Demon Days (May 24th, 2005), hit #1 on the UK Singles Chart and #87 on the Billboard Hot 100. The song features Shaun Ryder from the Happy Mondays and Black Grape, and apparently he was supposed to be saying It’s There, but it sounded more like It’s Dare, so they just changed the title. Why not? Cartoon characters can do what they want. I’d like to see an animated G-Light party with 2D, Murdoc, Noodle and Russel. Albarn should at least call on him to do guest vocals on the next Gorillaz album.

It’s also worth noting that DARE sounds like it could slip into into Your Woman, by White Town, especially after the chorus. Remember White Town? Me too. They had that one song

featuring a trumpet line taken from My Woman by Al Bowlly.

on your ipod, shame on you.

Listen to clips of the songs alike parts of these songs here:
(Quick, before G-Light burns you with laser vision)

Partake in these related videos:

« George Harrison vs. The Chiffons My Sweet Lord Lawsuit
Arcade Fire vs Eddie and the Cruisers or Keep the Car Running on the Darkside »