George Harrison vs. The Chiffons My Sweet Lord Lawsuit

OK. Let’s start this blog off with the quintessentiel example of songs being alike.

The Chiffons were an all girl r&b group that came out of the Bronx in 1960. The group hit number one in the U.S. with the song He’s So Fine as their first single. It was written by a songwriter named Ronald Mack, who died of cancer shortly after it was released. Carole King played piano on this track. The group included Judy Craig as lead singer, Patricia Bennett and Barbara Lee. Sylvia Peterson joined the group in 1963.

George Harrison became the first Beatle to have a number one single with My Sweet Lord in 1970 from his ambitious album All Things Must Pass. Interesting tidbits about this song include it’s original intention for Billy Preston, and Eric Clapton playing guitar on the track. The song’s guitar riff was used in the Oasis’s Supersonic fromDefinately Maybe, which is amusing since Harrison kind of trashed Oasis, saying in a French news interview that they wouldn’t even be remembered 30 years from now. Also, Wonderwall was a 1968 film by Joe Massot that Harrison scored, and that’s where Oasis came up with the term. This is a direct answer to the Scottish band Travis, who posed the question “What’s a Wonderwall Anyway?” in their song Writing to Reach You from the excellent album The Man Who. Anyway, I am rambling pop culture, and you should probably get used to it. If you like the song Wonderwall, I recommend either the version by Ryan Adams or the Mike Flowers Pop Orchestra for a cool lounge version.

These songs have essentially the same verse and chorus, which is what lead to the lawsuit in 1976. George Harrison lost this lawsuit when a judge said he “subconsciously plagiarized” The Chiffons tune on My Sweet Lord. He was ordered to pay Bright Tunes Music, who owned the copyright, $587,000. Disputes over damages lingered on into the 1990s, with Harrison’s manager Allen Klein changing sides by buying Bright Tunes, which published He’s So Fine, and continuing the lawsuit after parting ways with Harrison. Harrison ended up being the owner of both songs. The Chiffons actually did a version of My Sweet Lord, if only to amuse people like me, and it can be found on the album The Best of The Chiffons. I guess if you’re powerful, and you copy someone, just buy them out and make them pay you to cover your song. 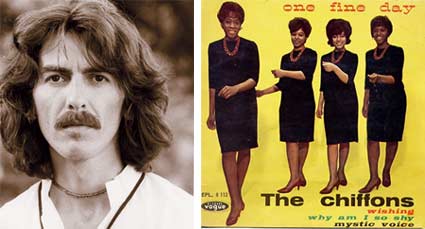