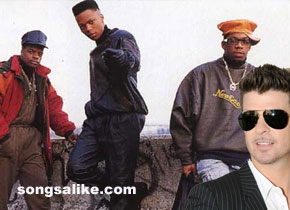 Alan Thicke (Show me that smile again) must have been blastin’ the BBD in the early nineties because his boy Robin Thicke straight up jacked the chorus of Bell Biv Devoe’s Poison for his song Blurred Lines. Now ya know. Spiderman and Freeze in full effect. Also, Marvin Gaye’s son is pretty upset that it sounds a lot like his daddy’s Got to Give it Up. If only Marvin was still here (cue Nightshift by The Commodores) and we could have Marvin Gaye and Alan Thicke duke it out.

Update March 2015: The estate of Marvin Gay is currently involved in a lawsuit for copyright infringement regarding Blurred Lines sounding like Got to Give It Up. Robin Thicke’s defense was that he was too drunk and stoned to remember what was going on at the recording sessions. They recently disclosed how much money the song has made overall, and the amounts that each artist received.  Blurred Lines made $16,675,690 in profits (holy crap) and was the biggest hit of 2013. According to testimony, $5,658,214 went to Robin Thicke, $5,153,457 was given to Pharell Williams and $704,774 went to T.I. The record companies took home the rest of the sacks of cash. I wish Bell Biv Devoe could get some of this reward money. It’s driving me out of my mind. You can’t trust a big butt and a smile.

DJ Starski made a cool mash up of Poison and Blurred Lines you can preview and purchase here.

Preview all the songs via the itunes links below: