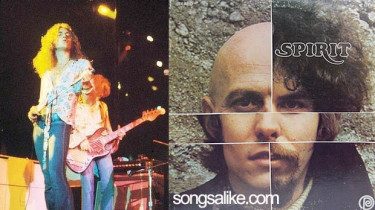 One of the most popular songs in music history is being questioned for plagiarism in an upcoming court case. Stairway to Heaven by Led Zeppelin may have ripped off the song Taurus by the band Spirit which was released in 1968.  The lawsuit is coming from the estate of the late Randy California who wrote the song for Spirit, and it’s no coincidence that this is happening right before of the release of a remastered version of Led Zeppelin IV. Francis Alexander Malofiy, the attorney  for Spirit, will attempt to get a songwriting credit for California on the song. Stairway to Heaven, which is worth an estimated $560 million, can be heard on every classic rock station in the world and even was famously denied by Wayne Campbell at the guitar store in the first Wayne’s World movie.

Jimmy Page supposedly wrote the song (which he refers to as his baby) using the powers of black magic and candles in 1970. Randy California died in 1997  when he  saved his son from drowning in Hawaii. Before his death, he told Listener magazine  that he believed that Led Zeppelin ripped him off, and was pretty miffed about it. Both bands were on similar bills in the late 60s, so it’s very probable that Jimmy Page heard Taurus during that time.  Listen to the audio clip of Taurus via the YouTube video below and you will hear that iconic guitar magic. It would be difficult to nail down who initially came out with this very basic chord progression, probably somebody before 1968, but this could be a giant payday for the Randy California family. Maybe they will sing the got $5000 song like Wayne and Garth did in the movie, but add some zeroes to it.